When Albert Speer, Architect of the Third Reich, drew plans for Hitler’s »Welthauptstadt« he had no idea he was about to create a collection of time capsules on par with those of London, Paris, or Rome – cities whose historical significance he sought to eclipse by creating a new World Capital. And they say Germans have no sense of irony …

END_OF_DOCUMENT_TOKEN_TO_BE_REPLACED

Welcome to Book Club. Followers of this blog will have noticed a theme developing over the past few posts, and to be honest if you find historical dereliction a worthwhile subject for photography you will sooner or later come across…

END_OF_DOCUMENT_TOKEN_TO_BE_REPLACED 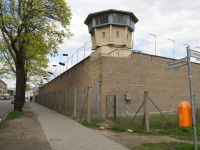 In 1960 my grandfather was abducted by Communist secret police for speaking out against the state. Locked away in a correctional facility that didn’t exist, in a district that wasn’t on any maps, regular people who gave voice to popular opinion were methodically tortured and in some cases killed by civil servants in the name of democracy. Fast-forward 53 years and I’m standing in a cell with my camera, trying not to believe what a former inmate is trying to tell me.

END_OF_DOCUMENT_TOKEN_TO_BE_REPLACED

It’s roots firmly in the 19th century, this sleepy town just south of Berlin was not only home and HQ to German high command through both world wars, but also played a crucial role in grooming the Reich’s elite, the olympic sports teams, and housing up to 75,000 secretive Soviets during Russia’s occupation of Germany. Today only ruins remain, and with bunkers below as numerous as buildings above ground you’d be hard pushed to find a site more richly steeped in history.